Mobile phone manufacturer Realme, Realme C17 A few days ago under its ‘C’ series Realme c12 And Realme c15 The smartphone was launched in India. At the same time, now a latest report has come out that the company is planning to introduce a new smartphone in this series soon, which will be named Realme C17. Actually, in the Geekbench listing, this phone has come up with the processor, which is expected that the Realme C17 will be introduced soon. Let us know further what information has been revealed about this phone.

According to the listing, Realme C17 has been spotted on Android 10 operating system and 6GB RAM. Apart from this, bengal was given in place of processor in handset, which is the codename of Snapdragon 460 processor. The phone will reportedly have 6 GB RAM and 1.8GHz octa-core processor. At the same time, the phone has got 253 points in single-core on Geekbench and 1,248 points in multi-core. Read also: Three new Realme phones, Realme Narzo 20, Narzo 20 Pro and Narzo 20A, will be launched in India this month 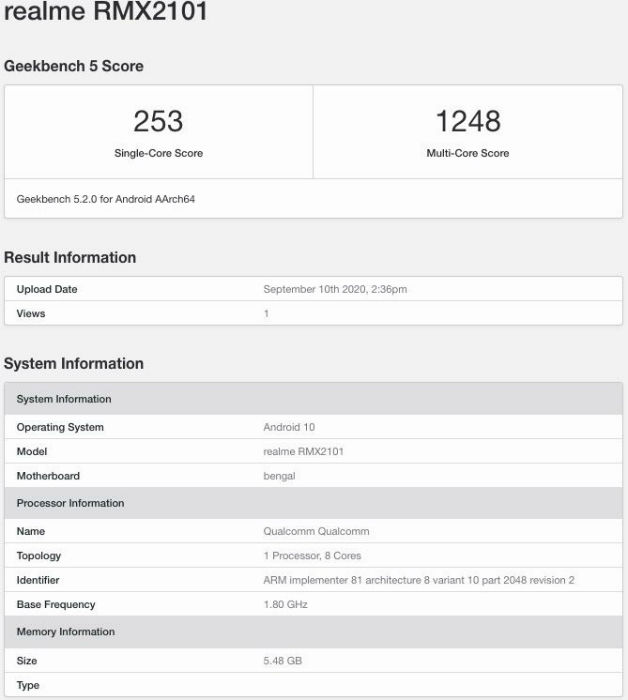 The new Realme smartphone is listed on the Geekbench website with the codename RMX2101. In this listing, information about the key specifications of the phone has been given. Significantly, the last time the company introduced the Realme C1 smartphone with the Octa-core Snapdragon 450 chipset.

If we talk about Realme C12 and Realme C15 smartphones, then both of them have the powerful battery present in the biggest USP phones. Both these phones support 6,000 mAh battery. While the company has launched Realme C12 with 10 Watt fast charging support, the Realme C15 smartphone supports 18 Watt fast charging technology. Explain that both these smartphones are equipped with reverse charging feature. Read also: Realme 7 Series Entry in India, Learn 6 Powerful Features of These Great Phones

Talking about the features and specifications of Reality C12, this phone has been introduced at 20: 9 aspect ratio which supports 6.5-inch HD + LCD MiniDrop Notch display with 1600 x 720 pixels resolution. The screen-to-body ratio of this phone is 88.7 percent and it is protected with Corning Gorilla Glass for display protection.

The Reality C15 has been introduced by the company on a 20: 9 aspect ratio which supports 6.5-inch HD + LCD display. This phone has been introduced on Android 10 which works on Realme One UI. At the same time, the octa-core MediaTek Helio G35 chipset has been given in this phone for processing.