Last year, Samsung launched 6,000 mAh from the Galaxy M series. At the same time this year, the company has introduced a 7,000 mAh battery with Galaxy M51. It is the largest battery phone available in India to date. There was a lot of discussion about the battery along with other features such as processor and camera and we also wanted to review it. Incidentally, Samsung Galaxy M51 was available for us to review and we started testing it without delay. For about 10 days, we tested this device and am writing here whatever results I got. 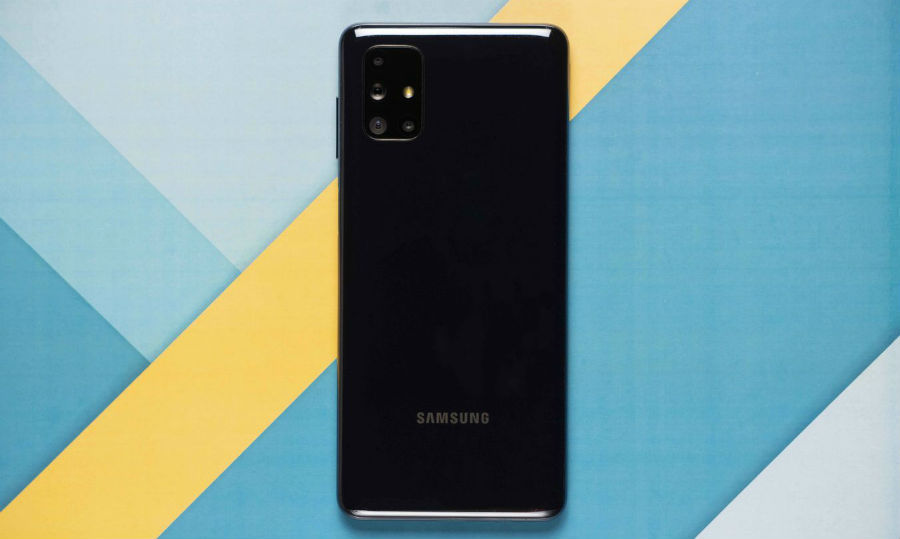 First of all, let’s talk about design and display. There is some newness in design this time. The company has tried to give it the look of Galaxy S20 by moving away from the traditional Samsung Galaxy M series. The placement of the camera is in the same style and the color combination is also very similar. Although the quality is good, but cannot say equal to S20. The company has given a body of polycarbonate which is in a glass finish. The good thing about the body can be said that despite the finish of the glass, fingerprints are not seen quickly and this phone does not slip quickly by hand. But there are some drawbacks such as heavy cannot say much it is 213 grams but due to the big battery, it has become a bit thick. At the same time, the company has not provided any cover with the sales pack, so if you are buying, then take the cover immediately, otherwise, it gets scratched very quickly. Read also: Top 5 Best Mobile Under 15000 in India

The body of the phone is curved from the back and also gives a good grip. The side panel has a power button and volume rocker on the right. The fingerprint scanner is the cow on the power button itself. Although most phones now come with an In-display fingerprint sensor in this range, you can say that there is a slight decrease, but I find a better side mount fingerprint than In-display which is also fast. The bottom panel will feature a USB Type-C port with a 3.5mm audio jack and a loudspeaker grill. A Sim card slot is given in the left panel. The phone has a triple-slot where you can use a microSD card with two SIMs. Overall, the design is satisfactory but could have been improved further. Especially in terms of quality. Read also: Flipkart Mobiles Offer that will blow your Mind 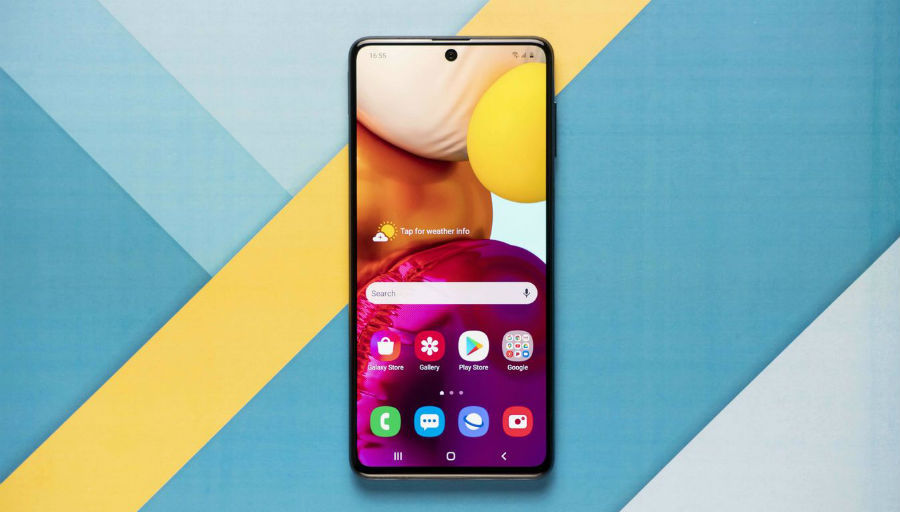 Samsung Galaxy M51 has been introduced by the company with a 6.7-inch screen and the company has used a punch-hole display. The phone’s screen resolution is Full HD + (1080 x 2400 pixels) pixels. In addition, the aspect ratio is 20: 9, and the pixel density is 393 PPI. The good thing can be said that the company has used the Super AMOLED Plus panel in it and after watching the display you will also feel it. At the same time, we can say that the screen protector is a bit old and the coating of Corning Gorilla Glass 3. At least version 5 was expected. Read also: SanDisk Ultra Dual Drive Luxe Flash Drive Review: What Impress Will Do With Premium Metallic Finish 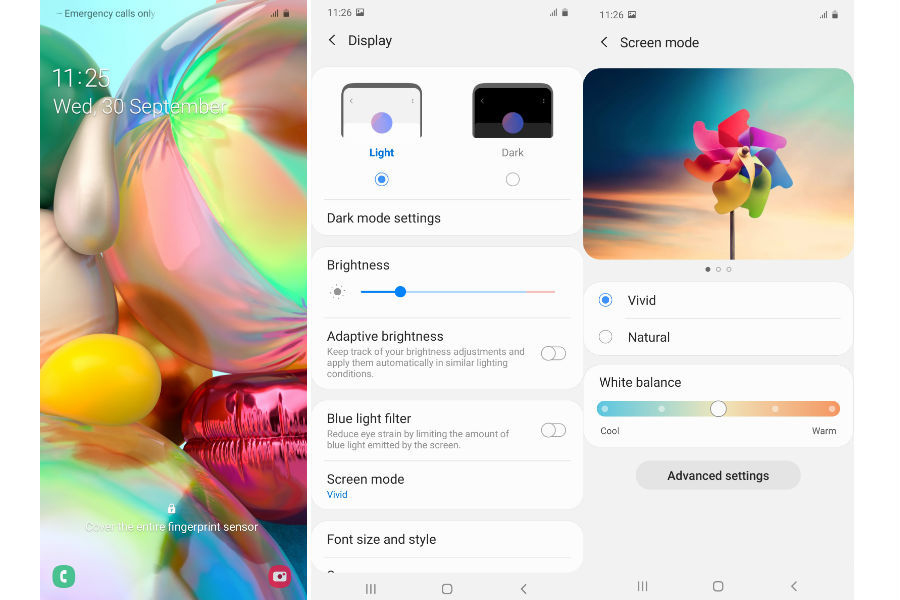 The phone’s screen is quite bright. The company has introduced it with a 78960: 1 contrast ratio. There is also HDR 10 support. The feel of the display becomes even better due to its easy to age screen. You will find bezels much less and the size of the punch hole is not too big. You can enjoy movies and games on it.

The phone’s touch response is also better and the viewing experience is also quite good. You can take a clear view from any angle. At the same time, you will not have any problem with any kind of light. One drawback I would like to mention is that if you got a 90hz refresh rate with all of these then it would be the icing on the cake. 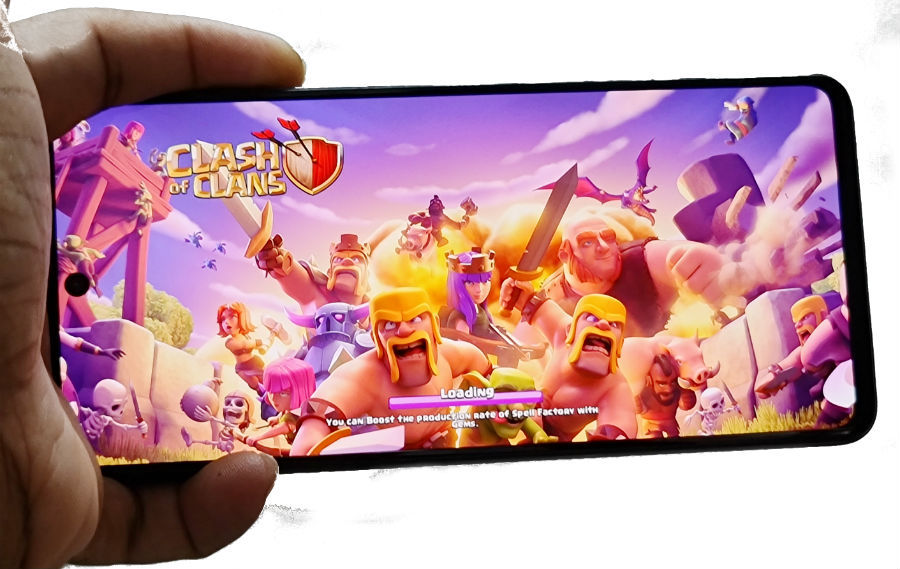 Samsung introduced the Galaxy M40 in India last year with a Qualcomm processor. Apart from this, almost all phones in the M series were available on the Exynos chipset. At the same time, the company has again given the power of Snapdragon to the Galaxy M51 and due to this, there was a lot of discussion about the phone. This phone works on the Snapdragon 730G processor and has an octa-core processor with 2.2Ghz clock speed. This processor with 8-nanometer architecture is not only famous for its superior performance but is also considered to be quite a battery efficient.

The company has introduced it in two memory variants. 128 GB memory with 6 GB RAM and 128 GB memory with 8 GB RAM. Along with this, there is support for memory cards up to 512 GB. It is not low in terms of strength and you can see this from the benchmark score as well. It was able to score up to 2,78,142 on the NTTU benchmark. Manhattan scores 2,087 and Terex up to 3,098 on the GFX bench famous for graphics. Similarly, Geekbench managed to score 521 on singlescore and 1721 on multicore. This is a good score for phones in this price range.

Gaming was also done during the experiment and multi applications were also open. The most important thing was that we did not see any heating problem anywhere and did not even see hang or lag. In this, you can enjoy the game on high graphics. Yes, a little heavy feel makes it a bit difficult to play the game for a long time. 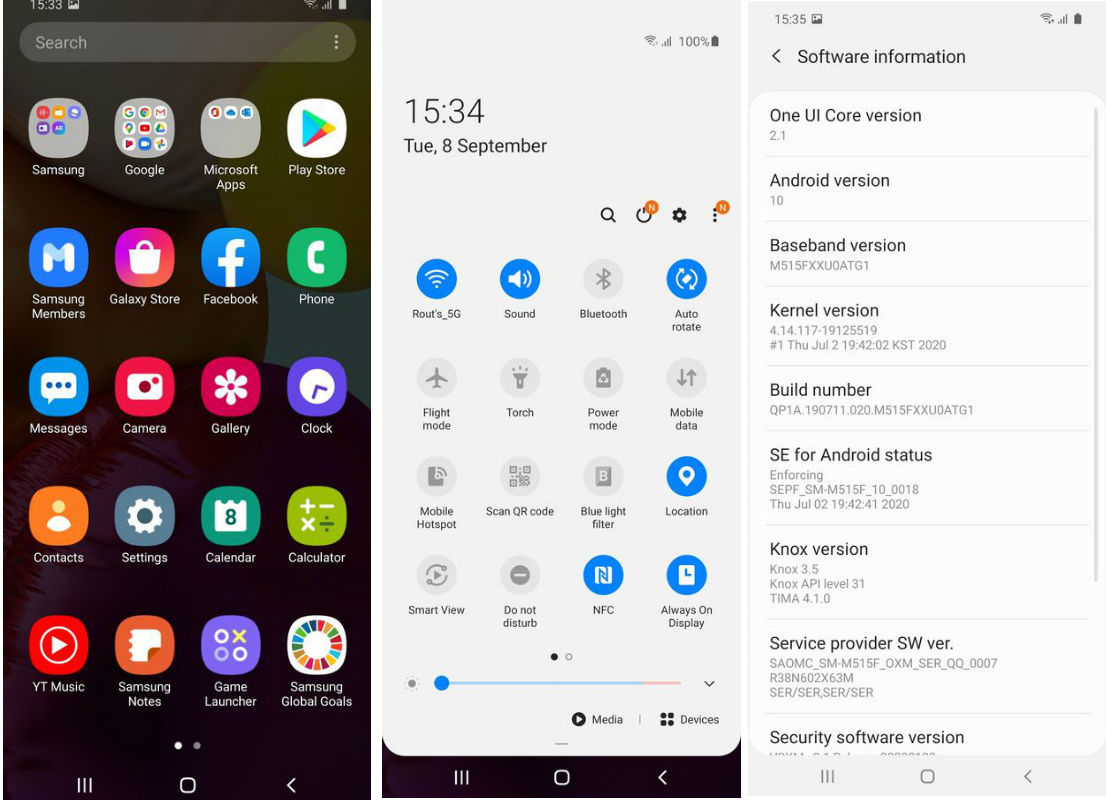 This phone works on Android operating system 10 and with this, you will get to see the layering of OneUI 2.1. Apart from Google, some Samsung apps are also preloaded with the phone. However, we liked the options like screen recording and quick share more. A smart view option has been given in the phone where you can cast the phone on TV without internet data. However, for this, it is necessary to support Meercast in TV. Nowadays this feature is quite popular on smart TV. Apart from all this, options like Dark Theme have also been provided in the phone which increases its usefulness. Apart from all this, you will also get Microsoft Office apps on the phone which further increases the usefulness of this phone. 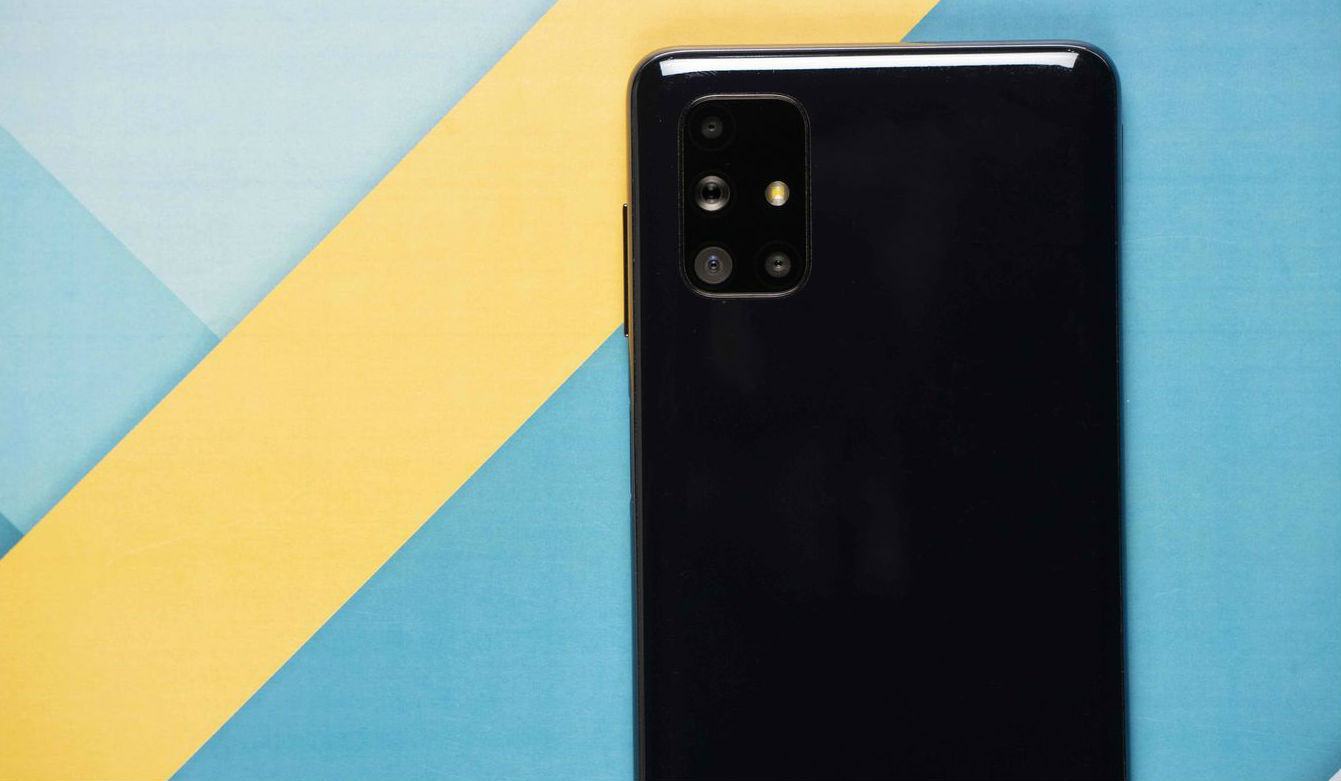 Talking about photography, this phone has a quad-camera setup which is exactly the same as the Galaxy M31S. Its main camera is 64 megapixels, which comes with F / 1.8 aperture. It can be said that the company has used Sony’s IMX 682 sensor. Samsung sensors were used in some previous phones. The second sensor of the phone is 12 megapixels and it comes with an F / 2.2 aperture. It is an ultraviolet sensor that supports angle up to 123 degrees. Along with this, the third and fourth sensors come with F / 2.4 aperture and the company has used a 5-megapixel camera. One of these sensors works in portrait mode while the other is a macro sensor.

There are options like Bixby Vision and AR Zone with the camera where you can make AR doodles in addition to AR face. These features were earlier in Samsung’s flagship phone but now the company has also provided with them. Apart from these, options such as slow-motion and super slow motion have been given. At the same time, options like hyper laps and night hyper laps will also be available with the camera.

Talking about camera quality, you will enjoy watching the picture. It has the power to take better pictures in every condition. Low light photography from the phone is also very good and if using night mode then it is quite clear. If you talk about wide-angle, then you can judge yourself, its quality is quite good. It can even be said that it is ahead of its competition.

By default for photography, it takes a picture at 48 megapixels, while for 64 megapixels you have to go through the aspect ratio. One special feature on the phone is a single take. Together in this mode, it creates a complete collage that includes everything from photos to boomerang videos. 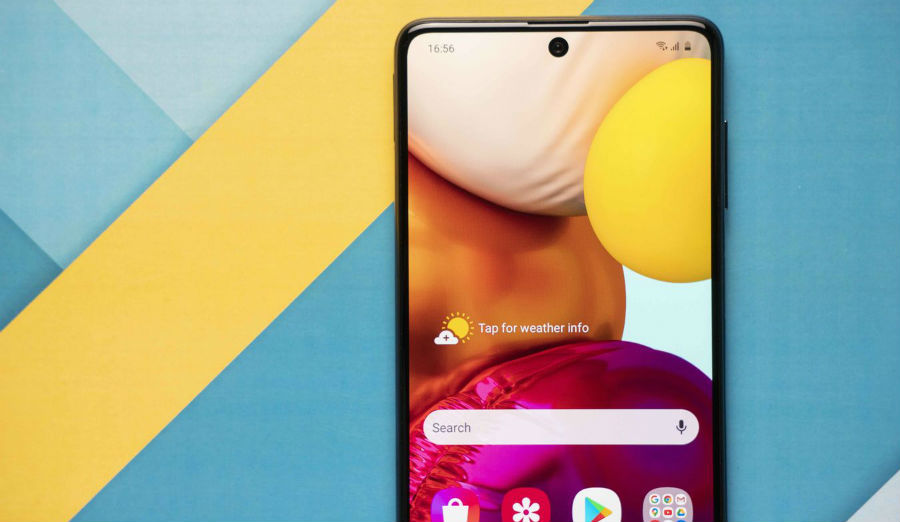 After the rear, when you come to the front, this phone has a 32-megapixel selfie camera. The front camera of the phone comes with F / 2.0 aperture and it also has wide-angle support. At the same time, the software-based bokeh effect is also available. At the same time we liked that even with the front camera, you get options like slow motion and single tech.

4K option is available with both cameras for video. That is, you can also record 4K video from the front with the rear camera. The video also captures this sound well. 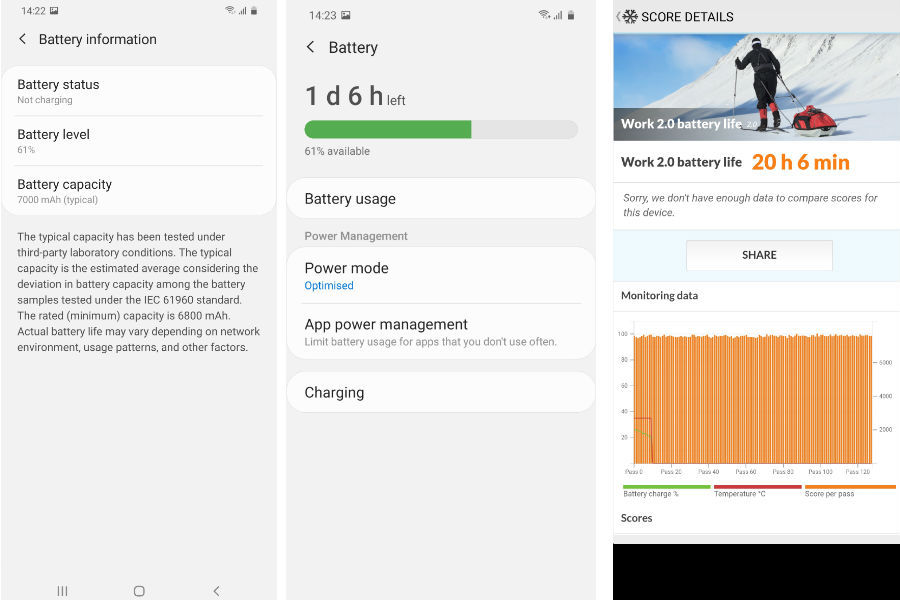 During the launch of Samsung Galaxy M51, the most noise was due to its battery. It is the first phone in India to have a 7,000 mAh battery. Along with this, the company has provided 25 Watt fast charging support. Despite fast charging, it takes more than 110 minutes to be fully charged. But in spite of heavy usage once charged, you also get relaxed for two days. Battery backup is excellent. It lasted more than 20 hours on the PC Mark test, which can be said to be a very good thing. 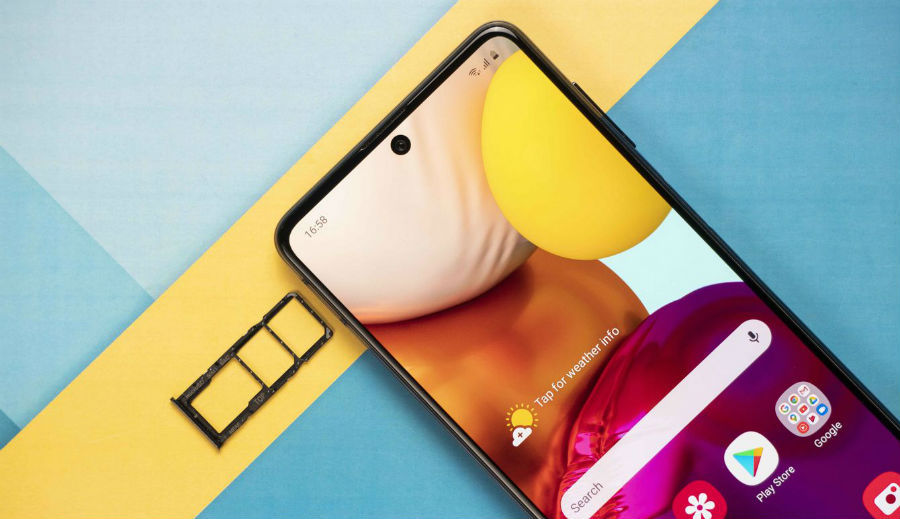 Samsung Galaxy M51 has dual 4G support. Apart from this, WiFi, NFC, and Hotspot have also been provided. However, we did not get Samsung Pay support. The company has provided USB Type-C to Type-C cable with the phone. At the same time, Dolby’s integration of music further enhances its utility.

Samsung Galaxy M51 has been introduced in the Indian market for Rs 24,999 and its second model is priced at Rs 26,999. The phone’s features are good in terms of price. With a large 7,000 mAh battery, the Super AMOLED Plus display and 64 MP camera further enhance its strength. The only problem you can face is design and quality. Scratches on the body of the phone are quite quick and are a bit heavy due to the large battery. However, its performance is met by these shortcomings. If you want another option in this budget, then options like OnePlus Nord and Reality X3 are available.

Nokia C3 review: Nokia’s realization with Smart OS, but slightly behind in features

Samsung Galaxy Watch 3 review: style such that every watch will look like a watch